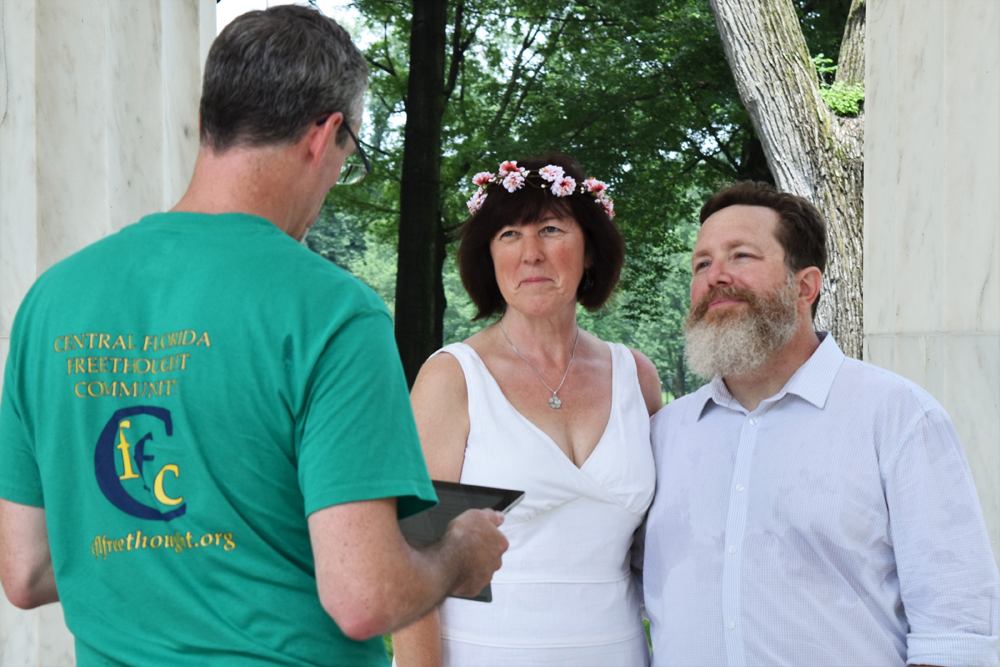 This post, written by Anita Macauley and Gregg Casagrande, originally appeared on TheHumanist.com. Above, the couple with humanist celebrant David Williamson during their wedding at the 2016 Reason Rally.

Secular and humanist groups mean a great deal to people, often being the one sure place where a person can connect with others who will be accepting and open to one’s views.

Our story is no different. I, Anita Macauley, and my now husband, Gregg Casagrande, were searching for a community where we could make personal connections, engage in stimulating conversations, and find others with a worldview that matched our own.

I was working in a very conservative, primarily Christian environment, where not too long ago there were before-work prayer meetings held weekly on our campus. Symbolism and talk of Christian ideals were ever-present. Gregg was coming out of a conservative, Catholic upbringing and lifestyle. He was once a Promise Keeper and attended Catholic educational institutions his whole life. The need for fellowship with other atheists and freethinkers was strong in both of us.

Fortunately, we both found the Suncoast Skeptics, a freethought Meetup group in our area. We were fellow group members and friends for over a year. As we grew to know each other’s minds and hearts better, our relationship became closer and took a romantic turn. Having this friendship grow into something more within the close-knit and supportive community of our group has only reinforced the importance of these bonds.

Our interest in providing community for fellow atheists and humanists has led us to work in leadership roles of our own group, Sarasota Manatee Atheists and Secular Humanists (SMASH). Our mission is to provide opportunities to socialize and be involved in activities that continue to build our secular community and contribute positively to the community at large. As we excitedly looked forward to traveling to Washington, DC, for the 2016 Reason Rally, we had also recently become engaged. We were already planning to have a secular wedding officiated by a humanist celebrant, and soon our thoughts turned to the spectacular idea of getting married in our nation’s capital. This would be a celebration of our profound love for each other, and of our gratitude for the ideals and people of the secular movement.

For those interested in getting married in DC, the marriage equality laws, lack of residency requirement, and no waiting period, makes this a fairly easy process. It took just a little research on the Internet and we were on our way. We applied to the National Park Service for a permit for the use of the DC War Memorial site, one of three places where weddings can be held on the National Mall, a process that also went smoothly and easily.

Finally, June 4, 2016, arrived. We listened to the wonderful speakers and at 12:15pm stepped away for our ceremony and nod to the bonds of tradition. Fittingly, our friend and humanist celebrant, David Williamson, performed our ceremony. According to David, “to be a wedding officiant is truly an honor on every single occasion, but to be able to officiate for two friends is a real joy.” It was a joyful moment that was all the more special because it was part of the greater excitement of bringing fellow atheists, humanists, and freethinkers together to move secular ideals forward.